Guided by the needs of intersex children and youth, our Law and Policy team advises local, state, and federal agencies on how best to protect the rights of children born with intersex traits. Drafting policy documents, assisting in implementation of intersex-inclusive programs, and providing comment on legislation that impacts the realities of intersex young people—these are just some ways interACT works to improve the lives of intersex youth across the country.

Read about interACT’s work on various policies below.

interACT submitted comments to the Department of Health and Human Services against a new proposed regulation that would allow religious discrimination in healthcare settings that could impact intersex individuals’ ability to receive care.

In January 2021, HB 6171 was introduced in Rhode Island. HB 6171—or the Protection of Youth with Variations in Physical Sex Characteristics Act—aims to prohibit genital surgeries on intersex children until they are at least twelve years of age and can participate in the decision. This bill aims to ensure that life-altering choices are not being made without the consent of those involved.

On April 13th, 2021 the Committee recommended that HB 6171 be held for further study and, as such, the bill is currently postponed.

In January 2021, interACT launched SB 225—or the Bodily Autonomy, Dignity and Choice Act—a new bill working to promote bodily autonomy on genital surgeries. SB 225, which builds off of both SB 201 and SCR 110, was introduced by Senator Scott Weiner and co-sponsored by Equality California, The ACLU of California, and The National Center for Lesbian Rights.

With the ultimate goal of providing children and their families a chance to make informed decisions about major surgeries that too often happen without consent, SB 225 specifies that elective surgeries on intersex children will be postponed until the child in question is at least six years of age and can participate in the decision.

In April 2021, Senator Scott Weiner decided to withdraw SB 225 from committee as it did not have enough support in the Business and Professions Committee to pass. The bill will be up for a committee vote in January 2022. 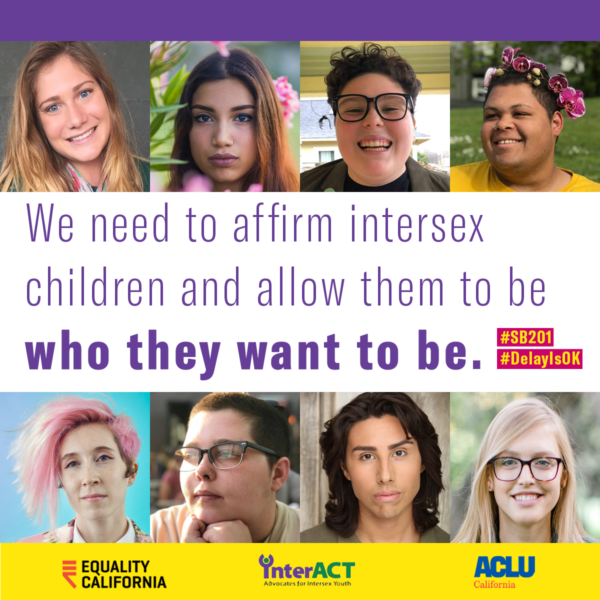 A graphic supporting California’s SB 201, which would have required the delay of forced surgeries on infants’ intersex traits.

SB 201, co-sponsored by interACT, Equality California, and the ACLU of California, would have ensured that individuals with variations in sex characteristics were given the opportunity to provide informed consent before any medical procedures that could irreversibly affect puberty, sexual function, or fertility, including reducing a clitoris, creating a vagina, or removing healthy gonadal tissue.

The bill was announced in 2019, and delayed to 2020 after opposition from urology and parents’ rights groups. interACT brought together a coalition of groups focused on LGBTQIA rights, civil rights, children’s rights, reproductive rights, and other issue areas to fight for an inclusive bill. Many intersex people and allies bravely traveled to testify.

In the end, four members of the California Senate Business and Professions Committee voted against SB 201. Three abstained, and only two voted yes. SB 201 was not advanced, shortly after the chair of the committee received a $50,000 donation from the California Medical Association.

The interACT team and allies pose inside the California Senate after a legislative briefing.

interACT is incredibly proud to have partnered with Senator Wiener and Equality California to have sponsored a resolution supporting the bodily autonomy of intersex youth. California State Senate Concurrent Resolution 110 calls on the medical community to delay nonconsensual and irreversible surgeries until an intersex person reaches the age of informed consent.

interACT supported the Intersex & Genderqueer Recognition Project in drafting revisions to California’s SB 179, allowing California residents to choose a nonbinary gender marker on their state-issued driver’s licenses and birth certificates. The bill was signed into law on October 16, 2017. Read more via Mic and Buzzfeed. 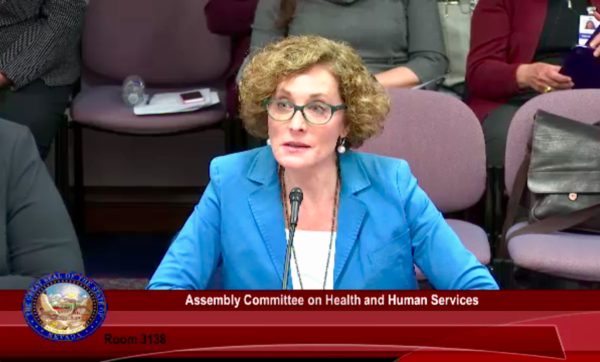 In 2017 interACT supported colleagues from Gender Justice Nevada in drafting SENATE BILL NO. 408. interACT Board president Georgiann Davis, Board member and Medical Advisory Group member Arlene Baratz, and interACT Youth member Hans Lindahl provided in-person testimony on the bill, although it ultimately did not advance.

2016: Work Against “Bathroom Bills” and Legislation That Polices Gender

interACT has called for an end to all efforts to force transgender and gender-variant individuals into segregated facilities without their consent as a result of a sex classification on a government-issued document. We have released official statements and sent letters to government officials in response to these “bathroom bills” that waste government resources and negatively impact all of our communities.

Our interACT youth members have spoken out against these bills to stand in solidarity with the transgender and gender-variant communities.

On February 18th of 2016, interACT sent a direct response to South Dakota Gov. Dennis Daugaard urging him to veto House Bill 1008.  The South Dakota State Senate sent the bill to the Governor on Tuesday, February 18th. If signed, the legislation would have enabled discrimination against transgender students in public schools and become the United States’ first anti-trans “papers to pee” law.

interACT was in strict opposition to the bill and used the letter to Gov. Daugaard to clarify a number of crucial points about the bill’s impact. Republican Governor Dennis Daugaard had an initial positive reaction to the bill, but on March 1, 2016 he rejected House Bill 1008 after many social justice groups and human rights advocates voiced opposition and declared it was discriminatory.

interACT’s official response to HB 2, sent on March 25th of 2016,  called for an end to all efforts to force transgender and gender-variant individuals into segregated facilities without their consent as a result of a sex classification on a government-issued document. These efforts waste government resources and negatively impact all of our communities.

HB2 was proposed, debated, voted on by both legislative branches, and signed by the governor in one day. This bill caused many of our LGBTQI friends in North Carolina to lose all protections and some intersex people to no longer be able to legally enter a public bathroom in the state of North Carolina. Discrimination should not come at the hands of the state.