Jump to a question:

What is the definition of intersex? 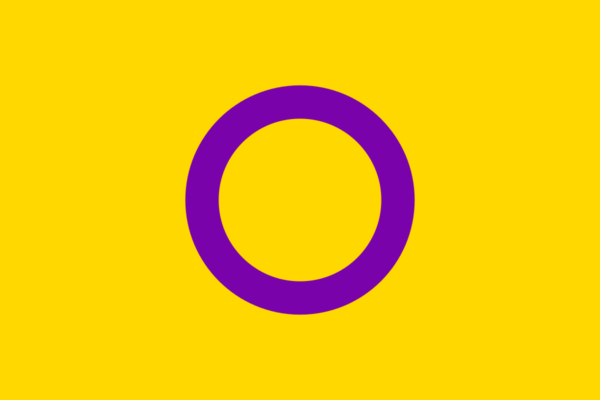 The intersex flag, created in 2013 by Morgan Carpenter of Intersex Human Rights Australia.

The I in LGBTQIA+ stands for “intersex.”

Intersex is an umbrella term for differences in sex traits or reproductive anatomy. Intersex people are born with these differences or develop them in childhood. There are many possible differences in genitalia, hormones, internal anatomy, or chromosomes, compared to the usual two ways that human bodies develop.

Some intersex traits are noticed at birth. Others don’t show up until puberty or later in life. Intersex people often face shame—or are forced or coerced into changing their bodies, usually at a very young age. Most surgeries to change intersex traits happen in infancy.

The word intersex also invokes a community. Intersex people are diverse, coming from all socioeconomic backgrounds, races, ethnicities, genders and orientations, faiths, and political ideologies. We are united by

Is intersex the same thing as being a “hermaphrodite?”

No. “Hermaphrodite” should never be used to describe an intersex person. Some intersex people have reclaimed this word for themselves, but it is usually considered a slur. There are many ways to have an intersex body, but it is not possible for one person to have both a fully developed penis and vagina.

The “h word” comes from mythology. It might suggest that intersex people are monsters, or not of this world. Many intersex people still see this slur used in their medical records.

Is intersex the same thing as “Disorder of Sex Development?”

“Disorder” or “difference of sex development” (DSD) is still a common medical term for intersex traits. Many intersex people reject the term “DSD” because it supports the idea that their bodies are wrong, or up to doctors to “fix.” Advocates in the United States often bring up the fact that until 1973, being gay was considered a mental disorder. Many natural human differences have been framed as medical problems, until communities fought for acceptance.

interACT generally does not use the term DSD. See interACT’s statement on DSD terminology.

How common is intersex?

How many intersex people are born each year? What are the statistics? Even in countries where most births happen in hospitals, these are hard questions to answer. This is largely because no one is required to track this information. But we do know that being intersex is very common.

About 1.7% of people are born intersex. (Compare that to a ~0.3% chance of having identical twins!) 1 in 2,000 babies (0.05% of humans) are born with genital differences that a doctor might suggest changing with unnecessary surgery.

These estimates are based on work by Dr. Anne Fausto-Sterling, who reviewed medical literature from 1955-1998. (Sexing the Body: Gender Politics and the Construction of Sexuality, 2000)

There’s a long history of abuse in attempts to prevent or “cure” intersex differences. “Why” is a very common question when it comes to human difference. Science is always looking for something to explain natural variation: a gay gene, transgender brain difference, cause of autism, etc. But as intersex people know, “why” can be a very dangerous question. When differences can be seen or measured on bodies, they can be changed. Surgeries to change intersex traits often happen at a young age, without a person’s knowledge or consent.

What is intersex surgery? 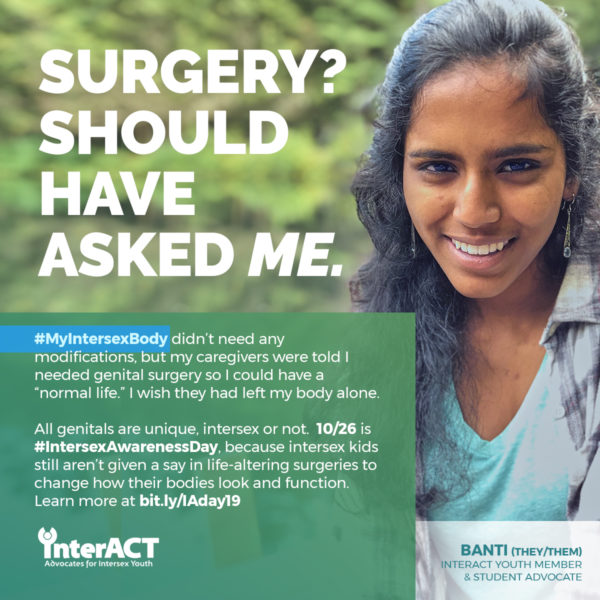 Intersex surgeries are non-lifesaving procedures to change natural variations in genital appearance or reproductive anatomy. This is connected to ideas about gender and sexuality, and what “normal” looks like.

Most intersex surgeries are done when a child is under 2 years old. Surgeries to change intersex traits are often offered to parents, and considered acceptable by some doctors, when a child is very young. This means that people are being denied important choices about their own bodies—choices that can affect fertility, sexual function, and emotional well-being forever.

Some kids may grow up and want to change their bodies, or be glad that their bodies were changed. Many other kids and adults live with incredible pain and trauma because these choices were made for them. When we act early, we never know who will feel which way. Waiting is the best way to avoid irreversible harm.

All parents love their children, and only want what is best for them. Surgeries to change genital appearance may also be wrongly framed by a doctor as an emergency or necessity. Many parents are never told about the high risks of these surgeries, never connected to other families or affected adults, and never told that simply waiting is an option.

interACT is dedicated to supporting all parents and all intersex people without judgement.

One intersex surgery without an individual’s consent is one too many.

As of 2021, no U.S. hospitals besides Lurie Children’s of Chicago and Boston Children’s have said that they don’t perform infant genital surgeries. Statistics are difficult to track, because U.S. hospitals are not required to report this information. However, as Kyle Knight, a Human Rights Watch researcher, told BuzzFeed in a 2020 article, “evidence of the rate of [infant intersex] surgeries and the hospitals performing them is hiding in plain sight.”

[Knight] cited a 2016 report published in the Journal of Pediatric Urology that found that 35 out of 37 parents of intersex children had “opted for cosmetic surgery on their children.” A 2017 paper in the Journal of Urology reported nearly identical rates of operations.

Infant intersex surgeries violate principles of informed consent, bodily autonomy, and self-determination. They may also be prohibited by female genital cutting laws and regulations against forced sterilization. Even still, some doctors claim parental consent is enough to change the appearance or function of an intersex infant’s genitalia, including cosmetic alterations to the clitoris.

Some countries are taking steps to end infant intersex surgery. For example, the country of Malta and the Indian state of Tamil Nadu explicitly prohibit intersex surgeries without the individual’s informed consent. In 2019, the European Parliament passed a resolution calling on all member states to end surgeries. Portugal, France, and Uruguay have each passed laws to protect intersex people, but which may still stop short of pausing non-consensual surgeries.

Many medical organizations agree that intersex people must be able to make decisions about their bodies, including the American Academy of Family Physicians, GLMA: Health Professional Advancing LGBTQ Equality, the American Counseling Association, and two state-level medical societies (Massachusetts and Michigan).

In the United States, at least 5 states have seen bills to prohibit infant intersex surgery. None have passed yet. In 2018 California passed a non-binding resolution, SCR-110, which was the first successful piece of U.S. legislation to acknowledge intersex human rights violations and harm. Most legislation that interACT sponsors would delay unnecessary medical intervention, including surgeries, to give people choices about their own bodies. If you’d like to help and receive updates, you can sign up for email alerts.

There is no way to “look” intersex. Every person is different. There are over 40 medical terms for the different ways sex anatomy might develop. Here are a few examples, and their common traits:

Like all human body parts, genitals come in all shapes and sizes. All genital tissues are homologous, meaning that two things share the same origin. For example, the clitoris and penis are homologous parts when a baby develops. With certain cues, the tissue will grow larger to become a penis. Without them, it will remain the smaller clitoris. Some intersex people will have a size that is naturally inbetween. What some people refer to as a “micropenis” is also related to this spectrum.

No human can develop both a complete penis and vagina. For more information on intersex bodies, see our definitions page.

What medical conditions are considered intersex?

As the Intersex Society of North America wrote over 20 years ago:

Intersex traits show that trying to sort all human bodies into two categories is not simple. When is a difference big enough to “count” as intersex? Who gets to decide? Historically, doctors were given authority—but their decisions were biased toward surgery.

Consider the case of a baby born with a visibly large clitoris. Currently, identifying a particular intersex trait might be a cue for doctors to offer clitoral reduction surgery to the child’s family. Public attitudes are quickly shifting. Regardless of how the underlying cause of an intersex difference is labeled, many in medicine agree that intersex surgeries must be chosen by the individual.

In response, some doctors are now arguing that some of the most common causes of differences like a large clitoris are “not intersex,” in order to continue offering surgeries. Terminology and classification may shift, but individuals’ rights to make choices about their own bodies still apply.

Is an intersex baby healthy? 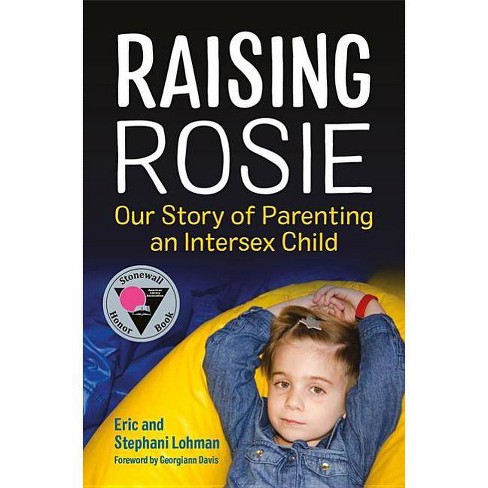 Raising Rosie, by Eric and Stephani Lohman, is a memoir and parenting guide. The Lohmans felt pressured to agree to unnecessary clitoral and vaginal surgery for their child.

The short answer: yes! Intersex differences in and of themselves (for example, differences in genital appearance) are perfectly healthy and natural. Surgery is generally only urgently necessary if an infant can’t pee, and that is very rare! Everything else can wait.

Intersex traits are natural human variations, not disorders. The intersex movement wants this understanding. This is similar to the way that LGB and T people have fought against being seen as mentally “disordered.” While intersex traits are nothing to be ashamed of, there are sometimes other accompanying issues to keep in mind.

Some intersex variations come with issues making or regulating hormones. Infants born with Congenital Adrenal Hyperplasia (CAH) often have a visibly larger clitoris. CAH also causes life-threatening issues related to how the body makes and responds to stress hormones. Surgery to reduce a clitoris or create a vagina will never address the separate life-threatening hormone issues. While genital surgery must be an individual’s choice, the hormone management issues associated with CAH must be taken very seriously.

In some cases, intersex gonads may carry real cancer risk. The actual risk level varies by medical diagnosis. Cancer risk in intersex gonads is generally not as high as some doctors used to think. For example, streak gonads (tissue that did not develop into ovaries or testes) have a relatively higher risk of malignancy and may need to be removed. By contrast, we now know that internal testes in individuals with Androgen Insensitivity are much lower risk, and can be watched and kept in the body.

If a person’s ovaries or testes are removed, or if they are born without organs that make sex hormones, they will not go through puberty on their own. A lack of sex hormones affects many functions of the body. It is especially important to think about bone health. Intersex people without gonads who don’t get adequate hormone replacement therapy may be at risk for osteopoenia as early as in their 20’s.

Above all, many health problems are the direct result of unnecessary intersex surgeries. Surgery creates scar tissue. Scar tissue affects appearance, sexual function, and even fertility, as it can impact being able to have penetrative sex. Removing ovaries or testes prevents a natural puberty. It also makes a person permanently dependent on external hormones. Infant clitoral surgeries are proven to reduce sexual sensation. Surgeries to create a vagina or move a hypospadic urethra are similarly invasive, with very high complication rates.

Some infant intersex surgeries increase the lifelong risk of UTIs. Many people require multiple surgeries to feel relief from issues caused by their first infant surgery. These are highly personal decisions best left up to the individual.

How do I know if I’m intersex? 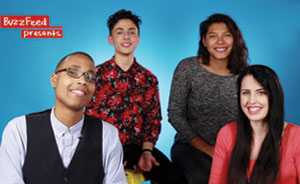 Could a person be intersex without knowing it? Without a medical diag