interACT recognizes that the law can be a powerful tool for change. This is why we employ novel legal strategies to ensure that the experience of intersex youth is not ignored by the courts. We are raising up the voices of youth via litigation and participation in collaborative legal efforts across the United States.

2020: Amicus Brief Against Discrimination in Sports

After Idaho passed the anti-trans so-called “Fairness in Women’s Sports Act,” the ACLU brought a challenge on behalf of plaintiffs Lindsay Hecox and Jane Doe. interACT submitted this amicus brief to expose the faulty foundation of a law based on a “physiologically-based dichotomy” of male and female, and to illustrate the tremendous harm that discriminatory exclusion and invasive “sex testing” would have on intersex individuals as well as transgender individuals. This brief was prepared with the generous assistance of pro bono attorneys from Patterson Belknap Webb & Tyler LLP.

A circuit court in Oregon denied a nonbinary individual’s petition for a change of their legal sex designation. The court, in its denial, suggested an assumption that nonbinary designations could only accurately apply to intersex people — which is a misconception that harms nonbinary, intersex, and gender-nonconforming communities. (Most nonbinary people are not intersex, and many intersex individuals do identify within the binary as male or female.) interACT joined with the Transgender Law Center and Beyond Binary Legal to file an amicus brief supporting them at the Court of Appeals of the State of Oregon, where they were victorious. This brief was prepared with the generous assistance of pro bono attorneys from Graham Miller Nash & Dunn LLP.

2019: Amicus Brief in Support of Gavin Grimm at the Fourth Circuit

For the second time, interACT filed an amicus brief supporting transgender individual Gavin Grimm, and refuting the Gloucester County School Board’s position that “sex” is an objective, physiological binary that can be allowed to deny individuals their rights. This brief was prepared with the generous assistance of pro bono attorneys from Patterson Belknap Webb & Tyler LLP.

2019: Amicus Brief Supporting Dana Zzyym in their Battle for an ‘X’ Passport

Since 2015, intersex community member Dana Zzyym has been engaged in a lawsuit (represented by Lambda Legal) over the State Department’s refusal to issue them an accurate passport. interACT, joined by the National Center for Lesbian Rights and numerous scholars, medical professionals, and intersex individuals, submitted an amicus brief supporting Dana’s right to be identified with an ‘X’ marker that reflects their lived reality as a nonbinary intersex person. This brief was prepared with the generous assistance of pro bono attorneys from Patterson Belknap Webb & Tyler LLP. 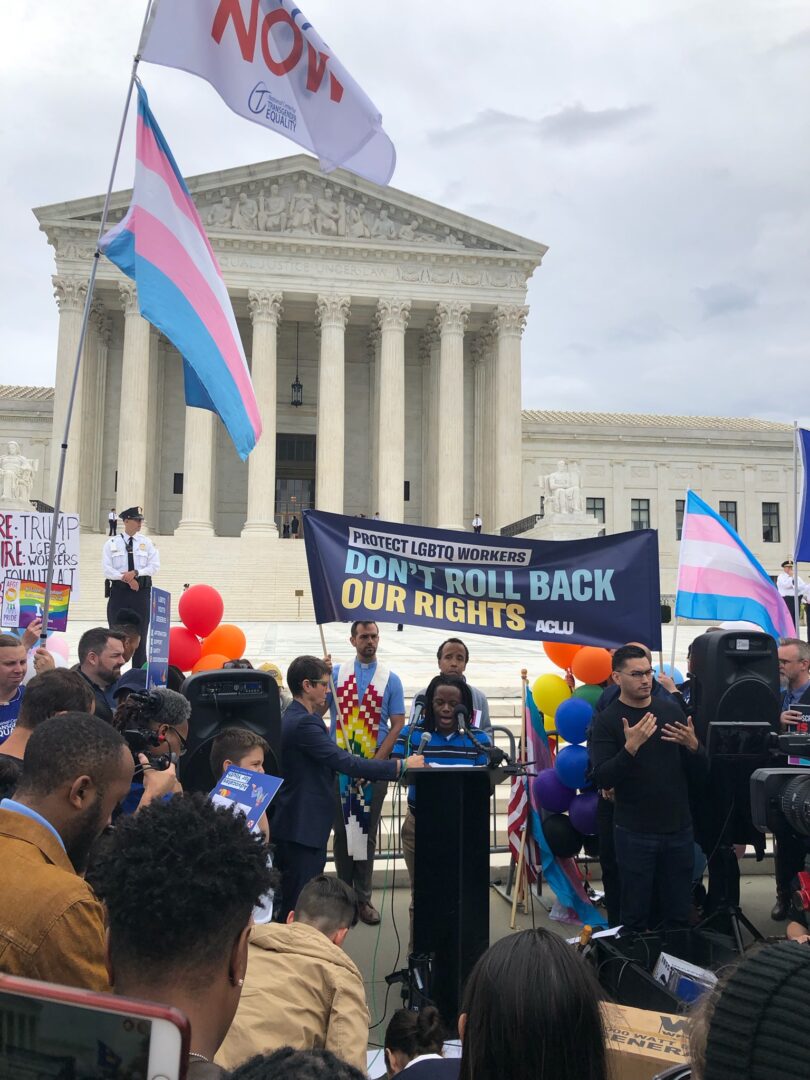 Bria Brown-King speaks on intersex issues and in support of LGBTQIA+ rights outside a Supreme Court hearing in October 2019.

In October 2019, the Supreme Court heard several pivotal cases on sex discrimination. interACT, joined by the Nonbinary and Intersex Recognition Project (formerly known as IGRP) as well as numerous scholars, medical professionals, and intersex individuals, submitted an amicus brief in support of Aimee Stephens, Donald Zarda, and Gerald Lynn Bostock, who were fired by their employers for their sexual orientations and gender identities which defied stereotypes and expectations associated with binary sex categories. The brief pointed out that limited definitions of sex — such as the one put forth by employers — exclude intersex realities while purporting to justify impermissible discrimination against LGBTQ+ people.

Ultimately, the Supreme Court ruled 6-3 that employers CANNOT discriminate against employees on the basis of sexual orientation or gender identity, with clear indications that intersex status is also protected.

Bria Brown-King, who was at that time a Communications Intern before joining interACT’s staff full time, spoke on the decision. They became the first publicly intersex person to speak out on the steps of the Supreme Court.

This brief was prepared with the generous assistance of pro bono attorneys from Patterson Belknap Webb & Tyler LLP.

When transgender student Gavin Grimm’s case went to the Supreme Court, interACT joined with InterConnect (formerly known as the AIS-DSD Support Group) and numerous scholars and medical professionals in support of Gavin and transgender students everywhere by filing an amicus brief on his behalf.

In this brief, interACT explained why transphobic bathroom policies hurt not only transgender students but those born with intersex traits as well. Several intersex young people offered their first-person experiences in support of Gavin Grimm and detailed why policies like the Gloucester County School Board’s must be rejected. This is believed to be the first-ever brief to the Supreme Court to address the lived reality of those born with intersex traits, and interACT is proud to have ensured that the central focus of the brief is the voices of intersex young people.

This effort was a collaboration between interACT and the New York City-based law firm Patterson Belknap Webb & Tyler, LLP. interACT is deeply grateful for the tremendous skill of the Patterson Belknap team and their generous support of this underserved community.

This was a medical malpractice case related to the informed consent for a surgery performed on Crawford’s adopted child (known as M.C.) at MUSC in April 2006. M.C. was born with ambiguous genitalia and diagnosed with a rare intersex condition called Ovotesticular DSD. The medical surrogates for M.C. sought treatment with a Pediatric Endocrinologist in Greenville, SC, who referred them to physicians at the Medical University of South Carolina for a “second opinion and corrective surgery.” Ultimately, after consultation between M.C.’s biological mother, M.C.’s medical surrogates, including the South Carolina Department of Social Services, and M.C.’s physicians, it was determined that M.C. would undergo surgery at MUSC on April 18, 2006. M.C.’s biological mother signed a consent form for the surgery. In addition, a South Carolina Family Judge issued a Court Order addressing the surgery following a hearing on April 12, 2006.

M.C.’s adoptive parents (who adopted M.C. seven months after the surgery and were not involved with M.C. at the time of the surgery) later filed this action alleging there was inadequate informed consent for the surgery and alleging that the South Carolina Department of Social Services was grossly negligent in facilitating the recommended surgery. After four years of litigation (including a lengthy discovery process), the Parties agreed that it was mutually beneficial to amicably resolve this case.

This case has been resolved and dismissed with no admission of liability or wrongdoing on the part of the Medical University of South Carolina, South Carolina Department of Social Services, or any of the physicians and/or employees.

This Sliding Bar can be switched on or off in theme options, and can take any widget you throw at it or even fill it with your custom HTML Code. Its perfect for grabbing the attention of your viewers. Choose between 1, 2, 3 or 4 columns, set the background color, widget divider color, activate transparency, a top border or fully disable it on desktop and mobile.

This Sliding Bar can be switched on or off in theme options, and can take any widget you throw at it or even fill it with your custom HTML Code. Its perfect for grabbing the attention of your viewers. Choose between 1, 2, 3 or 4 columns, set the background color, widget divider color, activate transparency, a top border or fully disable it on desktop and mobile.
Page load link
<script